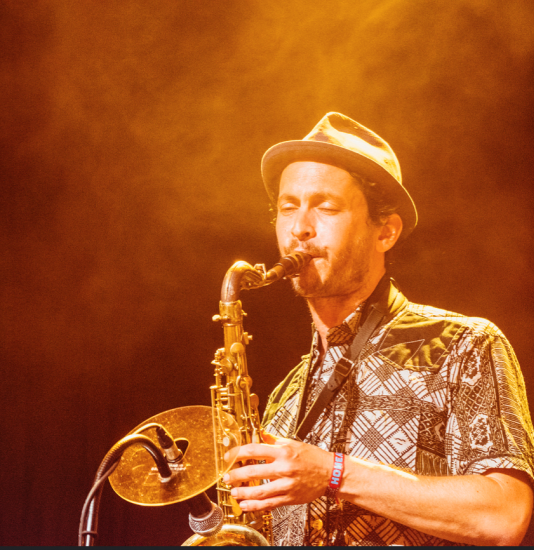 In 2001, Ben moved to Berlin, Germany, where he has been active in the city’s jazz, funk, and West African music scenes. He has been seen and heard in diverse musical styles, performing and recording with:  Ebo Taylor,  Pat Thomas, Xavier Naidoo, Tony Allen, Sirone, Poets of Rhythm, Marva Whitney, Gwen McCrae, Max Herre, Ulrich Gumpert, Patrice, Megaloh, Joy Denalane and Guts, among many others.

He is a founding member, musical director and producer of the Afrobeat Academy, who recorded and toured with the legendary Ghanaian guitarist and composer Ebo Taylor from 2009 to 2015. Ben produced Ebo’s 2010 album Love and Death, which is considered a classic of its genre.

In 2014 Ben teamed up with the Ghanaian multi-instrumentalist Kwame Yeboah to create the Kwashibu Area Band, dedicated to the preservation and innovation of Highlife music. Their production “Pat Thomas & Kwashibu Area Band” was released on Strut Records in 2015. The band performed at over 100 international festivals in 2016 and 2017, including Glastonbury, Roskilde, Hertme, Fusion, Sines, Montreal Jazz Festival and WOMADelaide. Their follow-up album “Obiaa!!” was released on Strut Records in October 2019, receiving 5 stars in London’s Guardian newspaper.

In 2021, Ben can also be seen performing with the acclaimed soul singer Joy Denalane.

Ben has performed with: